Perhaps it’s because Snow White was poisoned and came back to life with true love’s first kiss….

Same with Sleeping Beauty and that crazy spinning wheel….

Maybe that’s why we expect our Princesses to come back to life.

And wouldn’t that be nice.

But I find this whole Newsweek ‘What Princess Diana’s Life Might Look Like Now’, to be quite offensive.

I first heard about this on NPR; early Monday morning while still hitting the snooze button. They were featuring an interview with the author who wrote about what Princess Diana’s life would be at 50…if she were still alive. “Diana would have had botox! She would tweet! She would have had an i-phone!”

This is NPR? This is news? Who the heck cares?

And then I saw the cover of Newsweek and I was shocked. There she was; how she would have been at 50, a picture of Diana walking with Kate Middleton, smiling casually, glancing coyly at the camera, her face weathered a bit with age…..

I thought about how I would feel if someone modified a photo of Samantha to show her 15 years later; graduating from high school, going to prom.

And I thought about how far the media might go to gain attention.

Because, I hate to point out the obvious, but Princess Diana is dead. She will not come back to life. She will not have botox. She will not tweet. She will not stroll casually in the street with her daughter-in-law. The story Newsweek created is a silly fairy tale and those who loved her know this, they know this everyday.

On a week when our own family remembers, we realize that part of moving on is to grieve, to remember where we were six years ago but also to be, to live, to take care of each other and to celebrate how we have progressed further.

Because in the real world, true love’s kiss cannot always make things right, mice do not talk, birds’ do not sew dresses and we do not always live happily ever after….no matter how badly we want to or how much we can do with Photoshop.

And really, really, really Newsweek……don’t we have more important things to focus on; perhaps the living, the economy, the middle east, the environment?

If I wanted to see Elvis, I would have picked up the Enquirer.

There’s some stuff going on……

Saturday was our 11 month anniversary of Samantha’s passing.
Tomorrow is Jack’s due date.
Crap.
So on Saturday I did what any mourning Mama would do.
I did an Olympic distance triathlon. Olympic is a mile swim, a 30 mile bike and a 10k run. I have never done all of these distances at once. In fact, the last time I ran a 10k was before I was married.
But my crazy, searching-for-meaning self has found something in being sweaty, stinky, sore and having an elevated heart rate extended periods of time. It keeps me somewhat sane so I’m not questioning it…quite yet.
Signing up for this event was its own experience. I am now 40 so I qualify for the 40+ division. Also, since this is a USAT race, they divide classes by weight. If you are a woman who weighs over 150, you qualify for a different racing class.
The racing class is called Athena.
AND if you are a woman who weighs over 150 and you are 40+, you get to be in the Athena, 40+ division.
AND to track who you are during the race, they put your category on the back of your calf in black marker. I had A-40 on the back of my leg.
That’s right, Athena baby.
But I did it. And although I didn’t have a rockin’ time, I passed many 25 year-olds on the bike. That’s right, 25, you’re about to be passed by an A-40. Take it.
In the A-40 division, I placed 2nd. I placed 2nd out of 5 people but hey, I’ll take that ribbon.
Hubby cheered me on and even snapped a couple pictures: 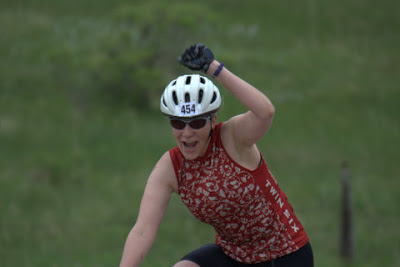 On the run…..I’ll be there in a little while

Me and my lovely friend Jill who convinced me to do this. Thank you Jill!

Pulling into the parking lot before the race, the sky was pink, Samantha pink. I asked her to watch over her crazy Mama as I try to make sense of the life we’re trying to create.

She makes me want to live a better life.

PFFFFHHHHHHH.
Do you know that Father’s Day wasn’t considered a holiday until 1913? And it wasn’t until 1966 that Lyndon B. Johnson officially declared Father’s Day a holiday to be held on the 3rd Sunday of June.
What did we do until then?
Did our father’s not feel validated? I think they probably did.
Not that I have anything against Father’s Day….not really. I have a great Dad and a great Step dad and I am truly fortunate to have them in my life.
But this Dad’s Day left a hole in my heart.
It is hard to find a Dad’s Day card for your hubby that doesn’t talk about how great he is with the kids, or how much his help is appreciated, how great he throws a ball…..yada, yada, yada.
But I did find one that talks about us, because that’s where we are now….us.
So….us….I made coffee. And bought french crullers. And his favorite libation. And booked us on a trip to Costa Rica this Fall. And I followed him around all morning….are you okay? I think I’m okay. Are you okay?
And in the end, we were okay. We had a lovely Father’s Day. We honored my Father. We ate steaks in the backyard, drank wine and had figs smothered with Camembert…..yum
It did not fill the void. It did not fix the fact that Hubby is really pretty great with kids and would be (is) an outstanding Dad. But we did laugh, toast and remember our Lil Miss.
And we made it through another day.
June 13, 2011October 20, 2018 Hschichie

I have been remiss in posting.

Our Courage Classic 2011 video….Thank you Scott for your talent and dedication to our cause!

Waiting for a plane to DC.

Enjoying a glass of red, watching travelers filter in and out.

Old pictures of the Saratoga races line the walls.

I have a Caesar Salad with scallops and 4 anchovy fillets.

CNN says the market is down.

What the heck is going on in Arizona?

Am I the only person who loves anchovies?

A man talks in a loud voice…..animated into a blue tooth….shaking his hands in the air as he sits by himself.

For the next leg.